Home » Blog » UXvizer's Blog » How many users are necessary to evaluate usability?

How many users are necessary to evaluate usability?

The question about the number of users necessary to get enough feedback on your interface is recurrent in a testing process. Do I need 5, 15, 30, 80 or millions of users to improve the interface and reach the goal I have set ? This post attempts to answer to this question.

Did you know that this question is still the subject of much debate among the variety of the UX disciplines? It is rooted in a story that began in the 80s and which is still current today. One would like to set a number as a global rule. But we show in this post that :

Each of these numbers make sense… But not under the same conditions and for the same test objectives. To choose the right number of users, context must be properly defined and you need to ask yourself 2 questions:

These questions are part of an iterative design process in a user-centered approach as described in a first part of this post.

For each stage of design, specific tests are designed and therefore the question of the size of your user sample is questioned. The enlightening of this question si presented in a second part.

Finally, we test on a specific scenario the scientific well-known precept of : “you need 3-5 user to get 85% of critical problems of your interface”.

When it is about to develop a new interface, connected to a new feature, redesign or product, a 4 stage iterative process should be setup :

At each of these stages, tests are carried out for the quality of the interface or the product, its usability or the quantity of traffic.

Two points must be distinguished :

The answer is two-folds :

At early design stage and before deployment, where qualitative evaluation is required, 3 to 5 users are needed.

To assess the ergonomic quality of an interface at a given time : between 3-5 users of the same typology (demographic criterion, profession, etc.) are sufficient.

After deployment or for specific tests

At release and post-release stages, quantitative evaluation is necessary and must be done on a consistent users sample size.

Two categories must be considered :

Use-case: Value of a tester

The goal of this part is to evaluate the contribution of testers in a user testing approach of the usability of an interface.

Let’s buy a bicycle in LeBonCoin !

The use case we chose was the following: go on the Leboncoin’s website in order to find a bicycle for the scientific director in Rennes (UXvizer’s headquarter).

The 6 testers were aged between 21 and 36 years old and quite familiar with the website and its functioning. Their user journey has been recorded such as they can be analyzed according to:

The main representative user journey – among the 6 testers – is based on the following 12 screens :

By averaging the tests of the 6 users, 13 attention points have been found in the Leboncoin’s interface:

Testing approach : little is better than nothing

Now, here is the protocole we followed to check the rule : “3-5 users are enough to find 85% of critical issues.”

Randomly, one user is picked among the remaining testers and the additional found errors  are accumulated on the previous ones. All the combinaisons of possible order of users have been executed (720 combinaisons in total) and an average curve has been computed. The barplot in Figure 3 below shows the number of errors found at each additional tester.

What we can observe is that :

What to keep in mind ?

For qualitative evaluation of your interface during the mockup, prototyping or development phase :

It’s automatic ! You can be assured of the consistency of the colors palette in your design

All right, moment of truth : Are all your texts accessible ? 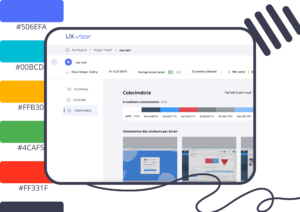 It’s automatic ! You can be assured of the consistency of the colors palette in your design All right, moment of truth : Are all your texts accessible ?